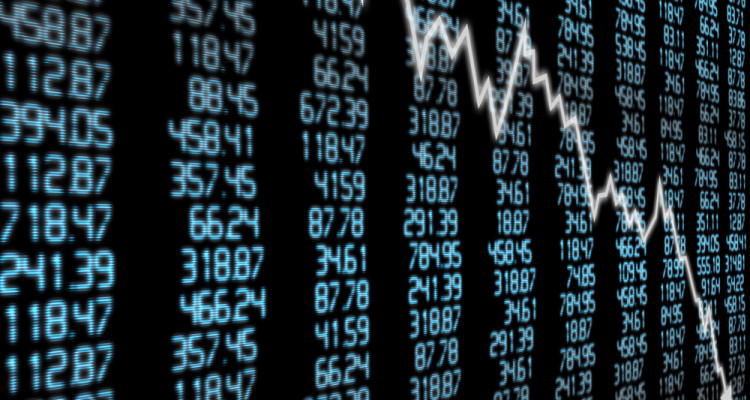 What we see happening today is why we called our news overview the “Debt Rattle” 8 years ago. The last gasps of a broken system ravished by the very much cancer-like progress of debt. Yes, it took longer than it should have, and than we thought. But that’s pretty much irrelevant, unless you were trying to get rich off of the downfall of your own world. Always a noble goal.

There’s one reason for the delay only: central bank hubris. And now the entire shebang is falling to bits. That this would proceed in chaotic ways was always a given. People don’t know where to look first or last, neither central bankers nor investors nor anyone else.

It’s starting to feel like we have functioning markets again. Starting. Central bankers still seek to meddle where and when they can, but their role is largely done. It’s hard to pinpoint what exactly started it, but certainly after Kuroda’s negative rate ‘surprise’ fell as flat on its face as it did, and then fell straight through the floor and subsequently shot up through the midnight skies, a whole lot more ‘omnipotence credibility’ has disappeared.

Kuroda achieved the very opposite of what he wanted, the yen soared up instead of down -big!-, and that will reflect on Yellen, Draghi et al, because they all use the same playbook. And the latter so far still got a little bit of what they were shooting for, not the opposite. Still, one could also make a good case that it was Yellen’s rate hike that was the culprit. Or even Draghi’s ‘whatever it takes’. It doesn’t matter much anymore.

Though what should remain clear is that it was in their interference in markets to begin with, as extremely expensive as it has been extremely useless and dumb, that the real guilt resides. Or we could take it even a step further back and point to the credit bubbles blown in the west before 2008. Central banks could have let that one go, and allow it to run its natural course. Instead, they decided they should inflate their own balance sheets. What could go wrong?

Then again, these inane policies concocted by a bunch of bankers and bookworm academics who don’t even understand how their own field works, as Steve Keen once again explained recently, would have blown up in their faces long before if not for China’s decision to join in and then some. Some $35 trillion, that is.

Money, debt, spent on ghost cities and on what now turn out to be ghost factories. Ghost jobs, ghost prosperity,a ghost future. Makes us wonder all the time what people thought when they saw China used as much cement in 2011-2013 as the US did in the entire 20th century. Did anyone think that would continue for decades, even grow perhaps? Have we lost all sense of perspective? How much cement or steel can one country need, even if it’s that large? How much coal and oil can it burn, let alone store? Blinded as we were, apart from the financial shenanigans, much of what the ‘developed nations’ engaged in since 2008 was overleveraged overinvestment, facilitated by ultra-low rates, in industries that would feed China’s hunger for ever more forever. Blind? Blinded?

And now we’re done. If Elon Musk doesn’t come back soon with a zillion little green Martians to pick up China’s slack, we’re all going to be forced to face just how distorted our media-fed visions of our economic futures have become, and how much pain it will take to un-distort them.

Which is what we’re watching crash down to mother earth now. And the central bankers’ loss of ‘omnipotence credibility’ is not something to be underestimated. It encourages people like Kyle Bass to dare the PBoC to show what it’s got left, even if, as Bass said, he’s got maybe a billion to go up against the multi-trillion Chinese state windmills of Beijing. It shouldn’t matter, but it does. Because the windmills are crumbling.

Bass won’t be alone in challenging global central banks. And that’s probably good. Without people like him, we would never see proper checks and balances on what the formerly omnipotent are up to. Kuroda has next to nothing left -or even less that that. Draghi and Yellen only have negative territory left to plow into, and at the very least that means putting positive spins on any economic numbers becomes exceedingly hard to do -and be believed.

Granted, they can still all go for helicopter money -and some will. But that will be the definite last step, and they know it. Dropping free money into a festering cesspool of debt is as useless and deadly as all previous QEs put together.

As we watch the world crash down to earth in epic fashion -and it ain’t even the 1st inning- people are already looking for a bottom to all of this (a waste of time). But if there’s one law in economics, it’s that when a bubble pops it always ends up below where it started. So look at where levels were before the bubble was blown, and then look out below.

Want to argue that this is not a bubble? Good luck. This is the mother of ’em all. The Lunar New Year, and the breather it brings for Beijing -though we’re sure there’s not a lot of family time off for PBoC personnel- seems like a good moment to take stock of the multiple crises that simultaneously and in concert accelerated head first into the new year. And boy, the rest of the world decided not to wait for China, did it now? For those who’ve seen this coming and/or have no skin in the game, it’s an amusing game of whack-a-mole. For others perhaps not so much.

To take a few steps back, if you ever believed there was a recovery after 2008, or even that it was theoretically possible for that matter, you’re going to have a much harder time understanding what is happening now. If you’ve long since grasped that all that happened over the past 8 years of QE infinity-and-beyond, was nothing but “debt passed off as growth”, it’ll be much easier.

It’s stunning to see for everyone at first blush that the “book value” of global proven oil reserves is down by $120 trillion or so since summer 2014. And it certainly is a big number; the S&P has lost ‘only’ $2 trillion in 2016. But what counts is the speed with which that number sinks in, and that speed depends on one’s reference frame. In the same vein, what’s perhaps most important about all the seemingly separate crises developing before your eyes is how they feed on each other.

Or, rather, how they all turn out to be the same crisis, kind of like in the perfect whack-a-mole game, where there’s only one mole and you still can’t catch it. So try and whack these. Or better still, try and imagine central bankers doing it, or finance ministers, spin doctors. They’re all so out of their leagues it would be funny if they didn’t have the power to make you pay for their incompetence.